Dogecoin price jumped more than 15% on Friday, 14 Jan 2022. before paring gains after Tesla began accepting the cryptocurrency as a payment currency in its stores.

Elon Musk indicated that Tesla would experiment with accepting cryptocurrency “Dogecoin” on Tesla products and merchandise, but did not address the issue of using Dogecoin on cars. 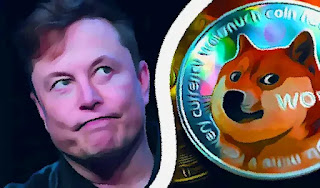 Immediately after Musk announced the matter, the price of the Dogecoin electronic currency witnessed a record increase of up to 40 percent. The currency was trading at 22 cents on Tuesday, compared to 16 cents the day before, before its price fell to about 20 cents. 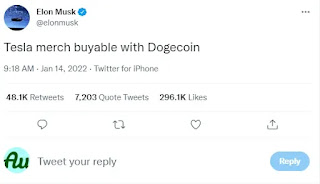 The CEO of SpaceX may be solely responsible for a number of token price increases, which have risen more than 60% in the last 30 days to $0.19 at press time. 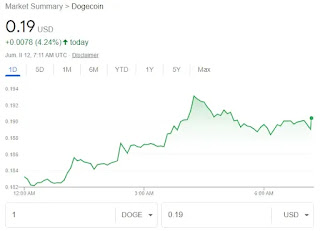 The value of Dogecoin rose by 20% within days of Musk's tweet, "One Word: Doge." This is just a single tweet Musk has made regarding Dogecoin, the first of which came on December 20, 2020.

Musk responded with a barrage of tweets related to Dogecoin in February 2021 including "Dogecoin is the people's crypto," and "Dogecoin is the only crypto". Approximately 40% of Dogecoin's value increased after these tweets.

On December 14, Musk said Tesla would accept Dogecoin as payment for merch. Musk has been showing support for Dogecoin for a full year. The price of Dogecoin surged more than 20% after his tweet.

The rise in the value of this currency comes after a tweet posted by the billionaire, Elon Musk, on Twitter, in which he said that his company, "Tesla" for electric cars, would accept it to buy some goods.

Using dogecoin to purchase merchandise from Tesla comes with a number of terms and conditions. Users will need a dogecoin wallet to transfer digital money to Tesla.

The company's website states that overpayments made in Dogecoin will not be refunded to the original payment method if the order was overpaid.

The Dogecoin network confirms payments up to six hours after a transaction is initiated according to Tesla.

Today, Dogecoin is worth more than $60 billion and is one of the largest cryptocurrencies in the world have multiplied in value many times since the beginning of the year.

A worrying success for investors

Since the beginning of 2021, the Dogecoin digital currency has been the subject of a lot of controversy and media coverage, as the currency is nothing more than a joke that began in 2013 to ridicule the fact that new digital currencies appear from everywhere and without a new reason or technology.

It is reported that the value and popularity of cryptocurrencies rose in popularity last year as a result of the economic fluctuations caused by the Corona pandemic and the promotion of these currencies by some institutions.

There is no good reason why Dogecoin is a currency of real value. Dogecoin has no apparent commercial or investment use, except for nerds speculating on it, and some of them trying to make money from it.

Much of Dogecoin's appeal is that it is very cheap to buy and sell when compared to other cryptocurrencies, which makes it more attractive to individual traders, who dream of making big profits from it.

It is difficult to take Dogecoin seriously, but the reality of the market imposes itself.

Do not miss to follow the cryptocurrencies prices and the crypto market capitalization from our page.